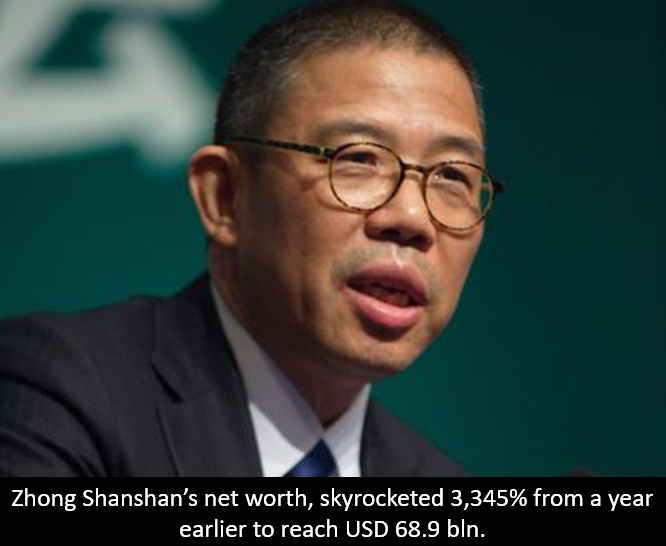 Apr 07, 2021 (China Knowledge) - China has more billionaires than ever with Chinese billionaires accounting for nearly a fifth of the total wealth on Forbes’ annual world's billionaires list.

The world’s second largest economy, China is home to the second highest number of billionaires, with 698, up from 456 billionaires last year. China is second to the U.S. and well over India's 140.

Forbes’ billionaires list has a record-setting 493 newcomers added to the list with an average age of 54, including 210 from China and 98 from the U.S.  Forbes said that 84% of them are self-made billionaires, who founded their companies rather than inherited them.

Nongfu Spring's Zhong Shanshan is reportedly the biggest gainer in net worth in percentage terms, skyrocketing 3,345% from a year earlier to reach USD 68.9 bln. The billionaire rocketed into the No. 13 spot following his bottled-water firm's massive listing on the Hong Kong Stock Exchange.

Jack Ma was dethroned as Asia's richest person by Mukesh Ambani of India and dropped to the No. 26 spot despite a nearly USD 10 bln gain in his fortune to USD 48.4 bln.

Globally, Jeff Bezos topped the list for the fourth year running, while Tesla's Elon Musk jumped into second spot on the list, up from 31st last year.

This year's billionaires have a combined worth of USD 13.1 trln, up from USD 8 trln last year, Forbes said.